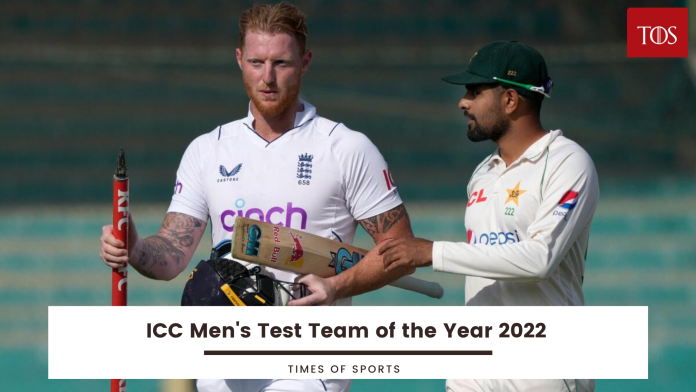 It recognizes the top men’s cricket players from around the world in spite of the playing nations in the Test format of the game.

Usman Khawaja scored 496 runs and averaged an eye-watering 165.33 in the series win in Pakistan, hitting two centuries and two further scores in the nineties to play a huge part in Australia’s hard-earned victory.

The stylish left-hander hit three further half-centuries in 2022, to finish the year with an impressive 1080 runs to his name and an average of 67.50.

Anderson turned 40 years old in 2022, and yet remains one of the most effective bowlers in the world game. In nine Tests he took 36 wickets at an average of just 19.8 and an economy of 2.42.

Despite of facing tons of criticism, Babar Azam was named in the ICC Men’s Test Team of the Year 2022. Notably, Babar receives criticism as a captain, not as a batter. Babar Azam was consistently performing with the bat throughout 2022.

He scored four centuries and a further seven half-centuries in the calendar year. In nine matches he hit an extraordinary 1184 runs at an average of 69.94, with his four centuries coming one each against the four-Test opponents he faced.

Indian wicketkeeper batter Rishabh Pant who recently faced a near-fatal car accident scored 680 runs from 12 innings at an average of 61.81 and a strike rate of 90.90.

Following are the full list of ICC Men’s Test Team of the Year 2022: Jaswinder Singh - January 30, 2023 0
The 2022-23 Summer for Australia’s Cricket Team was quite a decent one apart from the T20 WC. The Aussies registered Test Series wins over...

The upcoming Women’s T20 World Cup is expected to be a fascinating one.. Skipper...
India Cricket

The 2022-23 Summer for Australia’s Cricket Team was quite a decent one apart from...